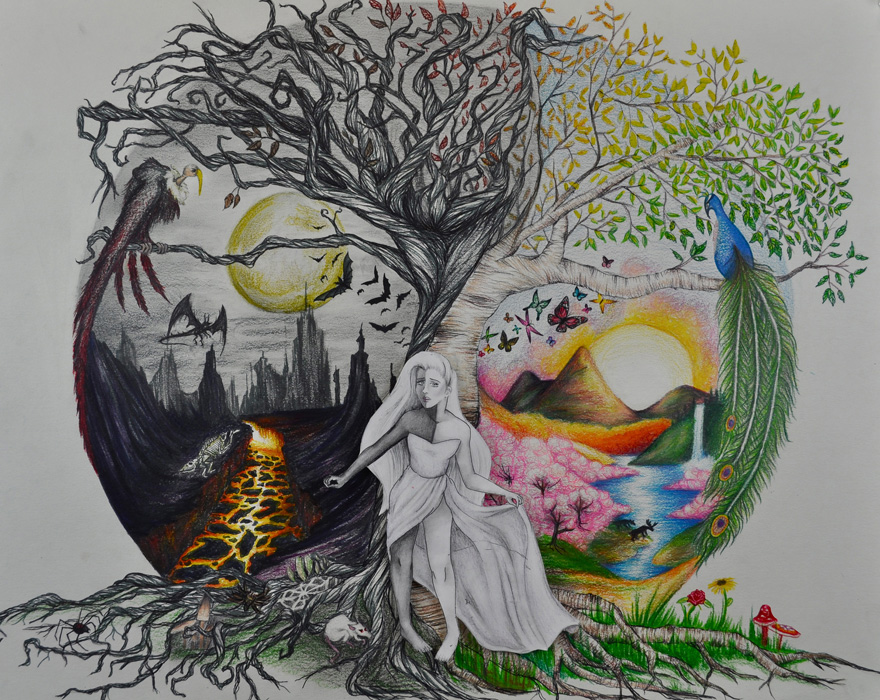 Artist Statement: The overall image is a Yin-Yang sphere depicting a montage of nature’s opposing forces which portray the possible influences faced when determining which path we chose in our lives.
My concept was developed in an effort to demonstrate the confused, lost feeling all of us have faced when we are conflicted with which path to “choose.” The young girl, who is in the center of all the chaos, is uncertain and confused as to which side or path to take. The competing influences are making the choice more difficult. In order to depict the “State of Uncertainty” I placed the frightened, indecisive girl in the center of the sphere, her angst, confusion and her inability to chose a side, provokes the onlooker to relate and maybe recall a moment in which they experienced similar feelings as they faced difficult decisions in their own life.
I was able to achieve this concept by using drawing techniques, which I really enjoyed. For this piece, I used colored pencils, markers, different inking pens and foam core. I used foam core to elevate the girl separating her from the background. By doing this I was able to give her the appearance that she is not part of either realm of the sphere– good or evil. Using multiple drawing materials enhanced the portrayal of each contradicting atmosphere I wanted in this artwork, the dark detailed pens gave a good defined ridged look on the dark side, and the soft pastel colored pencils made a whimsical, dreamy look on the light side. The materials gave me the freedom to do exactly what I wanted without any limitations.
To get deeper into the details: “Yin” the dark side; the Iris is represented by the moonlight. The showing of a dead tree, rocky cliffs, the flow of burning lava, and the scene inhabited by a dragon, bats, a vulture, and a rat, are a portrayal of nature’s dying cycle. On the opposite side “Yang” the light side, is represented by a sunrise as the other Iris. The depiction of nature’s renewal of life by incorporating the vivid colors of the rainbow embodied the good side of the sphere. With green mountains, a peaceful flowing river, inhabited with docile creatures such as: butterflies, grazing moose and a graceful peacock rested on a budding tree portrays Nature’s new beginnings. By creating a dramatic contrast of each side, I represented how negative and positive features are perceived. With such a vivid contrast, it compels the onlooker to compare the scene in relation to their own feelings and whether they identify with the good side, seemingly, more pleasant or comforting than the evil side with his dark and unpleasant environment.
Overall, I believe my concept in this piece is very relatable and easy to understand. It causes us to reflect on our own lives, the past, the present and our future while reminding us that whichever path we chose, it is our own and it defines who we are and where we’ve been. This piece is one of my favorite assignments that I have done so far this year. Its originality and the entire process of creating this image from the beginning to the actual execution of this concept, was something I had not done before and I feel it is exactly what I had imagined and hoped it to be.